The Pyrenees are a doubly-vergent collisional orogen formed since the Late Cretaceous as a result of convergence between the European and Iberian plates. The core of the range (i.e. Axial Zone) is an antiformal south-vergent duplex structure composed of imbricate thrust sheets of Hercynian basement (Figure 1). The Axial Zone itself is flanked to the north and south by fold-and-thrust belts.

Objectives: The principal objectives of this project are to use low-medium temperature thermochronology, applied with a systematic sampling strategy to constrain the denudation history of the Pyrenean orogen and hence to constrain it’s tectonic evolution and therefore to better understand geologic processes associated with accommodation of the upper crust during convergence and thrusting. We are working closely with Professor Josep-Anton Muñoz from the University of Barcelona.  We are also collaborating with Professor Peter van de Beek and PhD student Charlotte Fillon from the Université Joseph Fourier and Grenoble Professor Riske Huismans from University of Bergen, Norway as part of the PYR-TEC component of Topo-Europe.

The Pyrenees project is funded by NSF EAR-TECTONICS (#0538216; Fitzgerald and Baldwin,PIS: “Along-strike variation of the uplift and exhumation of the Pyrenean Orogen: Constraining the evolution of an intra-plate orogen”).

The Pyrenees are often cited as being an ideal natural laboratory to study tectonic processes involved in formation of collisional orogens because of their relatively small size, quality of exposure, preservation of syn-orogenic sedimentary strata and absence of significant late-extensional collapse structures.  However, it is the variation in structural style along-strike due to the decreasing amount of shortening from east to west that permits geologic processes associated with convergence to be better evaluated.  By relating the along-strike variation in denudation history with the variation in structural style we will learn more about collisional tectonics within this orogen.

We are focusing on the following questions.  Is the onset of convergence/thrusting synchronous or diachronous with uplift and erosion? Does denudation become younger, of lesser magnitude and less asymmetric, to the west as predicted by decreasing estimates of the total amount of shortening from east to west and the change in structural style? How do the across-strike patterns (spatial and temporal) of denudation change along-strike?  Do denudation rates change as a function of how convergence is accommodated through time, as observed in the central Pyrenees, or do denudation rates vary along along-strike?  In essence we seek to constrain the along-strike (east-west) variation in the denudation history and how this relates to the accommodation of upper crustal deformation during continental convergence in response to relative plate movements, pre-existing structures and varying lithologies.

We are applying low temperature thermochronology (K-feldspar 40Ar/39Ar, apatite fission track (AFT) thermochronology, apatite (U-Th)/He dating (AHe)) on samples collected from a number of across-strike (north-south) transects parallel to, but west of, the ECORS-profile (Figs. 1).  Our approach is systematic in terms of our sampling strategy and the use of vertical sampling profiles, but also with respect to the integration of multiple thermochronometers.  Our results will allow us to test existing lithospheric-scale cross-sections and models that predict the amount of denudation (e.g., Teixell, 1998; Beaumont et al., 2000), constrain new lithospheric-scale geodynamic models based on interpretation of new deep seismic lines, and provide input into studies that seek to quantitatively model the drainage evolution of the Ebro Basin and sediment flux (e.g., Garcia-Castellanos et al., 2003, Sinclair et al., 2005). 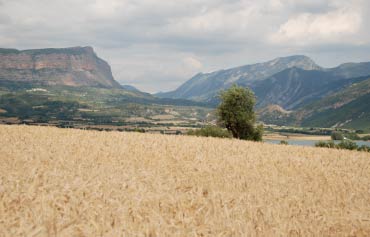